Book Review: A Love to Last a Lifetime by Clare Swatman 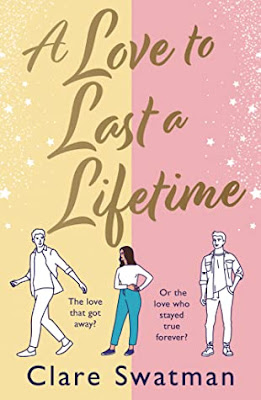 A Love to Last a Lifetime is the sixth novel by Clare Swatman, an author of novels and journalist of several different women's magazines. The book follows Erin, a music-therapy-therapist, who has been married to Greg for quite some years. They live their lives and struggle with each their own troubles, when suddenly Erin walks into Adam. Her university boyfriend, who she never really stopped loving. Now that he is back in their hometown, will she leave Greg for the love of her life, or will she stay faithfull to the man she married.

I was so excited when I heard about this book. It felt like a book that would have drama, but at the same time really sweat moments. This excitement was toned down very quickly when I started reading the book. I just couldn't seem to like it. When I finished the book, I quickly came to the realization that I could only rate this 1 star. Let me tell you why:

Let's start with the characters. The three main characters are Erin, Greg and Adam. To be honest, I did not like any of them. Quickly I started to love Sam and Rose, Erin's best friends. They felt like complete characters who had positive and negative traits. The main characters lacked that. They all felt so negative. Almost everything the author told us about them was about how they were just such negative people. Atleast, this happens when the story is in the present-time. Because when the author talks about Erin and Greg in the past, they seem so much better as people. That just all got lost in the present-day story.

I feel like Adam was especially annoying as a character. He was na asshole in the past, and now he wanted to stay friends with Erin yet he wanted to move this relationship to a higher level constantly. And that just made him so unlovable.

Don't get me wrong, characters don't have to be perfect human beings. I can absolutely love a good written villain, but there was nothing to love in these characters, which made it hard to want to continue reading.

Erin as the main character was just not it for me. I just could not understand why she even loved Adam after all these years. She kept repeating the same mistakes, and that made it feel like there was no character growth in the book.

The book moved back and forward between past and present, which I liked. It made it very clear what the relationship was like between these people, but again the chapters got repetitive, and the same thing kept coming back again and again (The word repetitive been used repetitively in this blog as you may have noticed ;) ).

Music played a massive part in this book, and I feel like the author wanted to put it in every aspect of the book. One character was in a band, special mixedtapes being made, music therapy, songtitles at the beginning of a chapter. I think it was a bit much.and could have done with less.

Moments that could have been well-written arguments, were cut of short everytime. It felt like the author did not know how to write the arguments, but did want them in the story. They were not detailed at all, and made it feel a bit weird. When I read an argument or discussion in a book I want to know what the characters are thinking, I want it to go deeper. Now, it felt like I could just see that the vibe was off but that was it.

When I talked about Erin, I said that there was no character growth for her. Well, that is untill the end of the story where I feel like everything suddenly moves out of nowhere, and within a few pages I was at the end of the story. This honestly made me feel so confused and for me there were no signs at all that it was moving this way. The ending just is to abrupt for my liking.

When I finished reading the rating I was going to give was very clear to me. I could not wait to start reading a new book, and leave this one behind me, which is sad because of the expectations I had at the beginning of the book.