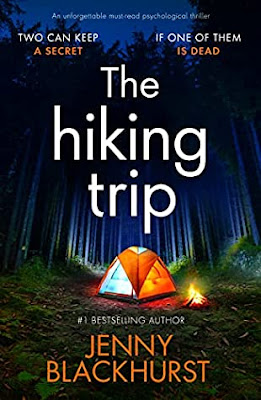 This time I got to read the ARC of The Hiking Trip by Jenny Blackhurst. Blackhurst writes psychological thrillers, and she can call herself the author of books like How I Lost You and Before I Let You In.

Maisie leaves her home for the hiking trip of a lifetime. Left behind by her friend, she meets Sera and Ric, brother and sister. What should have been the  best trip of her life turned into a terrible experience.

Twenty years later a women named Laura hears about human remains found in Canada about to be identified. If these remains are identified, her secret might come out and the life she build will get ruined.

The blurb of this book got me hooked immediately and made me want to request this ARC, so when I started actually reading it I said a little prayer, hoping that the book would not let me down. And I'm glad to say... it didn't and I actually rated it 4 stars. Here is why:

First of all, the story got me hooked on from the start of chapter one. As soon as I started reading the questions started popping up in my head. There was so much I wanted to know! It's very intriguing and you just want to figure out what happened and what the big secrets are.

The story switches between past, present and media coverage (newspapers, podcasts, forums). I think this really helped build the story. This way the story moves toward what really happend out of different directions. This way the story doesn't become boring. There were often little cliffhangers at the end of the chapter, after which the next chapter moved back to the present. It worked out perfectly for this book.

The characters were really well written. The past and present versions of them are different, which is good since a lot of time has passed since what happend at the hiking trip. The characters have grown and lived half of their life since the events in Canada. The way the characters were written I could even look past  the secrets that they were keeping and understand the reasoning behind the actions they took.

Everytime I thought: 'Now I figured it out', and then I was proven wrong, and eventually it turned out I was totally wrong, I did not expect this ending. There were a few plottwists, some more surprising than others. Everytime I thought we were going to find out what really happened the story switched back to a different part of the timeline. It was teasing me so much!

The reason why I gave it four stars was because I thought the ending was a bit sudden. I feel like there are still some questionmarks in my head that should need answering. I wasn't 100% satisfied with the ending that I got.