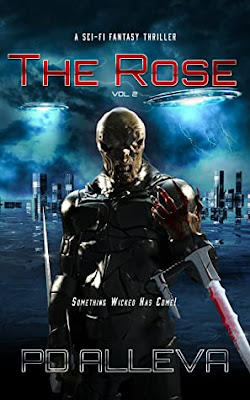 The story continues. Beginning at the conclusion of Vol 1, The Rose Vol 2 follows rebel freedom fighter, Phil as he battles alien vampire Sanos. Phil's mission is to follow Sanos into the depths of hollow earth to infiltrate Drac City and rescue sandy from the clutches of the alien vampires.

When I started reading Volume 2, I thought that I was going to like it more than the first volume. The first volume was not bad, it definetly had potential, it was just missing something. I was very hopeful that those things I missed in the first volume would be found in the second novel. Unfortunately, it wasn't.

In the first book I did not like the length of the chapters, they felt to long which made it difficult to get through, now there were shorter chapters in the second volume. But after a few chapters I figured that these chapters were way too short, often being only a few pages. Everytime I got into the story and point of view of the chapter, it ended and the POV was changed again. It made it though to read.

A lot of the things that happend were very predictable. I often guessed twists and turns before they happend which made it boring to read. There wasn't anything that really surprised me while reading. On my goodreads there is an example in the review with an spoiler alert.

The characters are still really vague and still feel very two dimensional. I want to get to know them better, but the way this is written it feels like there is no character development. Some characters even felt a bit unnecessary.  For me those characters were Cam and Grimes, they did not add much to the story for me even though I actually really like Cam as a character I felt like it would have been possible to leave him out of the story without much changing.