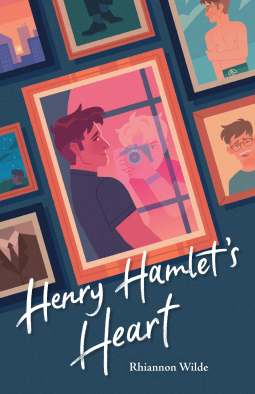 A sparkling queer YA romance set in Brisbane, Henry Hamlet's Heart follows one guy and his sometimes hilarious, sometimes heartbreaking journey to love.

Henry Hamlet doesn't know what he wants after school ends. It's his last semester of year twelve and all he's sure of is his uncanny ability to make situations awkward. Luckily, he can always hide behind his enigmatic best friend, Len. They've been friends since foreber, but where Len is mysterious, Henry is clumsy; where Len is a heart-throb, Henry is a neurotic mess. Somehow it's always worked.

That is, until Henry falls. Hard. For the last person he imagined.

I have really mixed feelings about this book and I am going to try my best to explain why I gave it three stars.

When I read what the story was about I got so excited, there was a bit of a mystery what it was going to be about precisely, and I always love that. I ofcourse had my expectations, and unfortunately those were not met.

It was a bit hard to get into the story at first. I still can't lay my finger on what the problem was, but it was though to get through the first few pages. For a long time it felt like the story was not going anywhere. It was like I was reading loose points the author wanted to tell about, instead of it pointing in a certain direction. It was only towards the end that the novel started having a point it was working towards.

The characters and their background stories felt flat and unfinished to me. Henry was a developed character, but this point actually applies more to Len. I felt like I did not really know who he was, and what we knew about him was just a little, and mentioned only shortly. I mean, without spoilering anything, I thought that there were certain things that needed to be discussed further. Also, there could have been more communication between the characters. I still liked the main characters, it just feels like there could have been more to them.

I did really enjoy the ending. It was filled with emotions, emotions that I wish I had felt sooner. My heart felt like it was going to explode at certain times because of the intense emotions. If this had been they way the novel was written in its entirety I would defenitly rated the book four stars, but now I had to leave it at three.