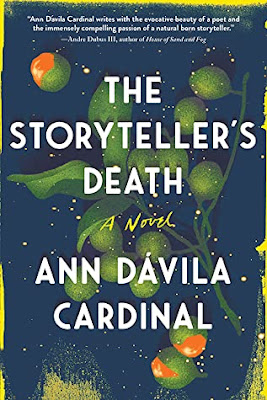 There was always an old woman dying in the back room of her family's house when Isla was a child...

Isla Larsen Sanchez's life begins to unravel when her father passes away. Instead of being comforted at home in New Jersey, her mother starts leaving her in Puerto Rico with her grandmother and great-aunt each summer like a piece of forgotten luggage.

When Isla turns eighteen, her grandmother, a great storyteller, dies. It is then that Isla discovers she had a gift passed down through her family; s cuentistas. The tales of dead family storytellers are brought back to life, replaying themselves over and over in front of her.

At first, Isla is enchanted by this connection to the Sanchez cuentistas. But when Isla has a vision of an old murder mystery she realizes that if she can't solve it to make the loop end, these seemingly harmless stories could cost Isla her life.

This book absolutely amazed me. I went in with zero expectations, but ended up absolutely loving it. The story kind of jumps through time, sometimes it's small jumps, sometimes bigger jumps. It is story that covers quite some years and a lot of family history. It being written this way made sure that we, as readers, know everything we need to know in order to read and understand the story.

The story was captivating, I wanted to know more and more. If I would have had the time I could have finished it in one sit. There was so much to read about and experience. The story itself did not move super quickly but it is written in a way that makes it so easy to glide through the book.

The characters are so well described. You can really see them develop throughout time. They really grow and mature when they get older. It makes the characters very realistic and like an actual family. I loved the way how the bonds between the different characters were described and how those relationships developed throughout the story.

The story was not predictable at all. I had no idea where the story was going and what was going to happen. So, ofcourse, I did not expect this ending.