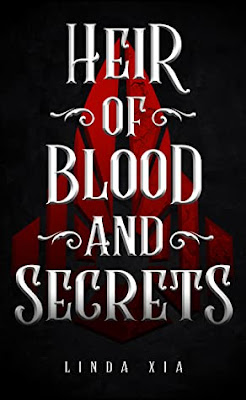 Before I start this review I want to thank Linda Xia, the author of this book, for reaching out to me and offering to send this book to me in exchange for an honest review. I got so excited when I read what Heir of Blood and Secrets is about, that I had to read it! So here we go!

Heir of Blood and Secrets follows Scylla, the daughter of an important magistrate of Devovea. On a very important night, an important magistrate gets killed, and her father is the number one suspect. Scylla has to do everything in her power to find the actual killer. Her father could not have done this, right? In the meantime, she discovers many things about her home, things that have been tightly locked away, until now.

First, I want to say that I loved the author's note at the beginning of the book. It was so inspiring to read the road Linda Xia has walked to get where she is now. As an aspiring writer, it was inspiring and pushed me to keep going and follow my dreams.

Now for the actual story. These characters have fought their way into my heart. They are inspiring, realistic, and have such an amazing dynamic. Scylla is such a fierce girl. She knows what she wants and she learns that she can stand against those who do not have the same opinions as her. She has been through quite some things during her youth, but she is standing tall and preparing herself for the future.
Ilya is Scylla's good friend, and the son of another magistrate. He is quite the opposite of Scylla, more reserved, maybe not as willing to stand up for himself. But they have been best friends since they were little and they are on this adventure together. He is often there to give Scylla an important reality check as well!
The friendship between these two is written very realistically. It is not all perfect, but they really have this dynamic that only exists when you no each other through and through. They have inside jokes, amazing memories, and are basically like family.

The writing style this author has was really easy to get into. It sucked me into the story and it read really smoothly. There was barely any focus needed to read. I genuinely could read this while on a very noisy train. I think that says a lot.

The worldbuilding is very well done, especially for a book that does not have that many pages. Everything that I needed to know about the city-state, the government, and the people was explained, but it was incorporated into the story in a way that did not make it boring to read. If there is one thing I don't like it is big parts of just text about worldbuilding.

Some twists and turns were a little too predictable to me. I had guessed some things that were going to happen, not into the full details, but the major plot lines I had figured out pretty quickly. This is why I decided on four stars for this book, instead of five.

Also, sometimes I just missed a little bit of the description of Scylla's thought process. It was there most of the time, but then sometimes she would do something, and it left me wondering why she would decide on doing that.

I wanted to finish with one thing that I absolutely loved. After I finished the book, I realized that there was no focus on romance. It doesn't mean it was not there, but it was not the main focus. I love reading a YA book that is not focused on romance, but instead focuses on the adventure or quests the characters are on.