All The Tides of Fate - Adalyn Grace 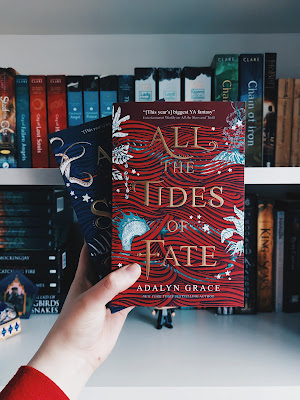 Before I could start my March TBR I first had to finish the book I had already started. Said book was All The Tides of Fate by Adalyn Grace. The book is the sequel to All The Stars and Teeth, which I read last summer and I just could not wait to get to it.

The story continues with Amora as queen of Visidia. She is leading her people like she was meant to be, but the people can't know her weakness. They can't get to know what Bastian and she found out on their adventure. If they find out Amora won't be safe. The only thing that might save her is a quest in search of a mythical artifact. It is all she can do to rule her country. 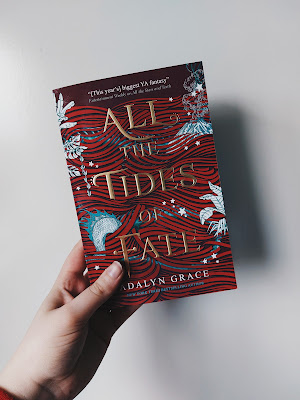 When I was reading this book I thought I would rate it 3 stars but in the end, it got rated 4 stars because I did really love it, it just could have been better. Here are my thoughts:

First, I want to talk about something I really love about these books. The characters. They are funny, fierce, and diverse. They all have their own kind of magic that they can use. They have different backgrounds, for instance, one is literally a queen, the other is a pirate. The characters are like a perfect mix of the people in our own world. There are gay, straight, non-binary characters. Like I said before it is a perfect mix and it is talked about in a way that always should be the case. A character with they/them pronouns is not made special, they are there and they serve their part of the story! The characters are just lovable and all have their own problems that they run into. Even though they use magic, they feel so real!

Now, there are two things I think could have been better about this book. The first thing that I found a bit annoying was that it was quite focused on the romance aspect of the story. And I know it was all for the bigger story, but it felt like too much for me. I would have liked more focus on the actual quest. Because the part of the story that was the quest moved way too fast, this being the second thing I think could have been better. I feel like there could have been more description in it, more detail. It just flew by and actually made me kind of sad that it was already over.

I expected the ending the author wrote, but I did not expect it. If you know what I mean. Like, the idea of this ending, or at least some of it, crossed my mind while reading the book, but I very quickly dismissed that thought. I told myself: 'Adalyn Grace would not write that, probably', but she did. And I liked it, most of it, definitely not all of it. Some parts broke my heart and I definitely shed a tear.

I would definitely recommend reading this book series if you are a lover of magic, pirates, and just big adventures. I think you will have a good time if you pick up this book!