The Knave of Secrets - Alex Livingston 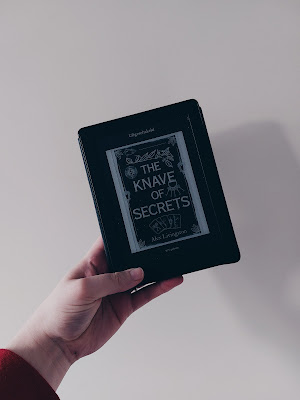 Con artist Valen Quinol gets the chance to compete in the Forbearance Games, and he can't resist the invitation. Valen is sent by a gangster to defeat a certain man. When Valen accomplishes this task and wins the valuable secret the man had. Valen and his crew are now being chased by gangsters, thieves and many other people. The secret is worth a fortune and can start a war.

What can I say? This sounds like an amazing idea, right? And that is exactly what it still is, a great idea. The execution of this idea was not great, to put it lightly. I had to rate it 1 star in the end, and that is something I don't do often. Let me explain my reasoning:

I'll start with the positive things about the book. First of all, the book has maps at the beginning! I think it is safe to say that everyone who reads fantasy books likes maps in the book. It just makes it so much easier to understand the story and where the characters are moving to. Also, there were appendixes at the end of the book, which is great to keep up with the characters and the games that are being played.

When I started reading the book I loved how we immediately started in the middle of the action. It pulls you into the story and makes you want to read more. Unfortunately, this did not continue throughout the rest of the story.

The characters were a bit older than most of the characters are in the fantasy books I normally read. This was a nice change. Normally they are barely adults and this time they were older than I am, much more mature.

Now for what I did not like about the story. I really had to push myself to finish this book. I finished it because it was an ARC and I wanted to write the review for it. Writing reviews is not always about loving the book, in that case, I would only be writing reviews for 5-star ratings. But if it had not been for this and I had actually bought the book, I probably would have DNF'ed it because it was making me not want to read.

The worldbuilding was quite confusing. It was difficult to understand where the characters were and what their place was in the story and their world. The distinction between places was often not made very clear most of the time. The maps helped a little with this but, I could not continuously keep going back to the pages with the maps on them. I also feel like the history between these places was described very poorly. If more detail had been put into it, it might have been clearer to the reader what was going on and how this could develop. More descriptions would have pulled me more into the story instead of questioning what was going on the whole time. In the second half, it became a bit clearer but it was quite late. Normally I already would have put it down by this time.

I liked Valen and his crew at the start of the book, but quite quickly they started to annoy me. It was little things that made me not like the characters anymore. And because the story moved quite rapid and often with breaks in the story, the author could not really explain the motives for the characters actions. Many problems also would not have existed if there had been more communication between them. They had supposedly been working together for such a long time, literally years, but somehow they communicated like they had met the other day. I also felt like the marriage between Valen and Margo could have had a bigger impact on the story. Now it felt bland and like Margo was just 'the wife'. There was just so much more potential. Ten was also quite hypocritical, judging Valen for lying while doing it herself too. It added drama to the story that could have been added in a different way. How these characters ended the story was also quite underwhelming, and that might even be an understatement.

The book consists of numerous POV's, which did not work for this book and story. I often got confused because switching to a new POV often also meant a time jump or missing information in general. There also were too many different POV's. I counted at least five, which was just too many. If the story had been more detailed it could have possibly worked, but not in this case.

The last thing I want to mention is that the story in general just moved way too much. Important parts like the Forbearance Games moved by way too quickly. This is just an example, but there were more scenes where I just needed to know more and then it switched to a different POV.

In the end, I had to conclude that this book was not my cup of tea. I still want to thank Netgalley for letting me read this book in exchange for an honest review.