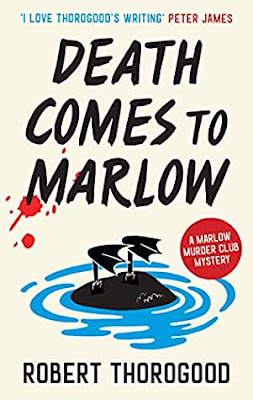 Death Comes to Marlow is the sequal to The Marlow Murder Club by Robert Thorogood, the creator of BBC serie Death in Paradise. The Marlow Murder Club follows Judith Potts, a 77-year old lady who lives in Marlow. She is enjoying her life, solving crosswords and swimming in the river. Not worrying about a thing, until one night she becomes the witness of a murder. Except, the police doesn't believe it's a murdercase. Judith will have to take matter into her own hands and starts solving the murder by herself. Along the way she meets two women, who become her friends and help her solve the murder. Together they are The Marlow Murder Club.

In Death Comes to Marlow we go back to Marlow and the ladies of the Marlow Murder Club. Life has been quiet in Marlow since last year's murder. But things are about to change when Judith gets invited to the party of Sir Peter Bailey, who is about to be married to his nurse. Everyone is having a fun time when suddenly they hear a crash and the body of the groom is found crushed under a havy cabinet. The door to the study was locked, which makes the police think it is an accident, but Judith believes otherwise.

I got to read the ARC of Death Comes to Marlow in return for a honest review. All thoughts are entirely my own.

When reading The Marlow Murder Club this summer, I fell in love with Judith Potts. So, when I saw the sequal of this book on Netgalley I had to request it! Death Comes to Marlow was like entering a warm bath of familiar feelings. When I finished it I was shocked and just had to rate it 4 stars. And here is why:

When I started reading the book I was immediately greeted by the familiar characters of the first book. They instantly put a smile on my face. Goodness, I love Judith, Suzie and Becks. Their personalities are so different, yet they are made to fit together so well. But here also comes the reason why I had to give the book four stars: I felt like the balance between the characters wasn't the same. Let me explain this to you. In the first book the three characters really work together to find out who the murderer is. In this sequel it felt to me like Judith did all the work and Becks and Suzie were just there. I feel like they only got more involved towards the end of the book.

I absolutely adore how this story has so many side-stories. They are not really relevant to the murder but they make sure there is character growth, and it makes the characters feel like they are actually real. It is not just focuse on the murder but also on their personal lives as well. It makes the characters more complete. It feels like you got dropped into someone's story and get to see every aspect of their life.

The author introduces the new character one by one into the story. I personally prefer this over the author dumping a mountain of characters into a story. Because if that happens, you just have to remember who is who immediately, and I often start to confuse characters with eachother. Here you slowly get to know the characters and how they are related to the story.

The book keeps the tension on throughout the story. Everytime I thought I had it figured out, and I simply turned out to be wrong again. The ending made me feel like a typical Agatha Christie ending. The way everything was revealed in the end, with this big reveal. There were moments where I was so sure who it was, but in the end I suspected everyone of the characters at least once. In the end I was so wrong, but the solutions was so smart and I would never have thought of it.

In the end I can say I would defininetly recommend these two books if you enjoy funny and cosy murder mysteries!