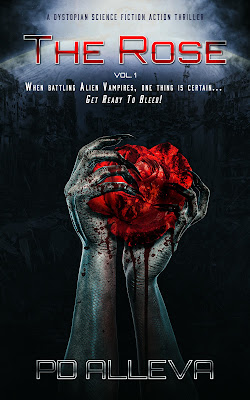 "Sandy Cox believed WWIII was over. But for those Alien Vampires, War Has Just Begun.Forty-eight hours after a World War III treaty is signed, Sandy Cox awakens in an underground compound unable to move. Tied to machines she screams for help but no one answers. At least no one human.And they’ve taken her unborn child.Phil is a rebel freedom fighter who has had more than his share of Alien Vampires. Armed with THE BLADES, a sacred alien martial art, he enters the compound on a mission to find Sandy. But as he battles through the compound, Phil discovers Sandy has her own agenda. Finding her stolen child is all that matters.But the vampires have their own plan and Sandy’s baby is at the heart of their diabolical plot. Joined by a crew of rogue soldiers, they must navigate the underground compound, battling genetically mutated humans, aliens and monsters.When battling Alien Vampires, one thing is certain…Get Ready To Bleed!"

Before I start my review, I want to thank P.D. Alleva for reaching out to me and letting me review his books. This will  be my first review, but later a review about Volume 2 of this book will follow!

When I heard this book was about Alien Vampires I was immediately intrigued. What was this going to be about? How does it work? So, I started reading and wrote down my thoughts.

The first thing I thought was that sometimes I would encounter sentences that could have been better written. They were not always as clear. Which made it harder to understand what was meant, but this was especially at the beginning of the book. When I had reached a farther point in the book it did not occur is often. Next, to it not always being clear I felt like their could have been more details added to the story. The descriptions were often not very detailed, and to me it made it hard to imagine scenes accurately.

Also, the starting point of the book felt a bit off to me. It was like you landed on one big question mark. There was so much information missing, that I started doubting whether I was going to like this. You just drop in the middle of big happenings in the world, but you have barely any context. And to be honest that context was still missing at the end of the book. I hope to find more about it in the second volume.

But the more I read, the more I started to like the story. It took me till the 30% mark, but then I was really invested in the story and I did want to know what was going to happen. I loved how original the story is and everything that is happening in it. Hopefully this will continue in the next book.

The last thing I want to discuss are the characters. I liked them and I wanted to love them. But in order to love them I need to know more of them. The felt a little flat. At the end of the story I still felt like I did not know most of them. I'm eager to find out if this will change when the story continues.